All for Joomla All for Webmasters

CACOL HAILS REPATRIATION OF IBORI AND HIS ASSOCIATE’S £4.2m LOOT, CALLS FOR ITS JUDICIOUS USE

The Centre for Anti-Corruption and Open Leadership, CACOL, has hailed the repatriation of £4.2 million loot recovered from friends, associates and family members of former Delta State Governor, James Onanefe Ibori from United Kingdom and enjoined the Federal Government of Nigeria, under President Muhammadu Buhari to ensure judicious use of the funds in areas that could revive the near comatose economy of the country.

In a release issued by the Centre on behalf of its Chairman, Mr. Debo Adeniran and signed by CACOL’s Director of Administration and Programmes, Tola Oresanwo, he stated, “We received the news that the British High Commissioner to Nigeria, Ms. Catriona Laing, said the money would be returned to Nigeria in batches. She said £4.2 million would be returned to Nigeria in the first batch. Laing spoke at a ceremony for the signing of a memorandum of understanding (MOU) between both countries in Abuja. She disclosed that the £4.2 million was recovered from Ibori’s friends, associates and family members. According to her the case of Ibori was complicated, saying that the UK government was still working on it to ascertain how much was really involved. She said with time, more funds stolen by Ibori would be repatriated to Nigeria”.

“It is noteworthy that James Ibori was convicted in the UK for money laundering and jailed. On 27 February 2012, he was charged with stealing US$250 million from the Delta state treasury. The former governor pleaded guilty to ten counts of money laundering and conspiracy to defraud at Southwark Crown Court, London. Incidentally, nothing tangible could be said to have happened to the people of this country even with all the looted funds being recovered or repatriated from both within and outside the country since the advent of the civil rule and even under the current dispensation as the country continues to run a mono-cultural economy with the prices of foodstuff and other basic needs skyrocketing and gradually rising beyond the reach of an average citizen”.

“Although, Nigeria’s Attorney General and Minister of Justice, Abubakar Malami, who signed for the country, said President Muhammadu Buhari has directed that the returned loot be deployed to completion of the second Niger Bridge, the Lagos-Ibadan and the Abuja to Kano expressway projects. The level of retooling of such repatriated funds became so worrisome and a cause for regrets that THE US government was reported to have insisted that Nigeria should be ready to ‘replace’ the over USD300m it returned if the fund was misused. This is so as previously repatriated funds continue to develop wings and find their ways into private pockets while the country laments its collective woes”.

“We therefore, lend our voice in requesting for the judicious use of this huge capital, both on social provisions of amenities that could ameliorate the unsuitable conditions of majority of Nigerians that have been so far, worsened by the outbreak of the coronavirus pandemic, and in enhancing certain capital projects that should have a positive roll-over on the national economy and infrastructure on the long run. We also pledge our commitment and readiness in providing monitoring and oversight roles towards assisting government in achieving openness and accountability at the end of utilization of the latest repatriated funds.”

The CACOL Boss added, “In as much as we welcome the repatriation of this loot, we want to call on the government to device means whereby stealing of public funds will be more difficult and very easy to expose. The fight against corruption should be intensified and those that have been found culpable should be prosecuted and be made to face the full wrath of the law so as to serve as deterrent to others. The whistle blowing policy should be reinvigorated. There should be more synergy with foreign financial institutions and investigators so that if any money is looted from the home front, it will not take eternity before the evil act is exposed”.

Click below to read June 15th,  2018, Edtion of Corruption Watch

Click below to read May 15th, 2018 Edition of Corruption Watch

The Centre for Anti-Corruption and Open Leadership, CACOL, has commended the Federal Government on the successful recovery and safe-keeping of the $322 million being part of the oil reserve confirmed to have been looted by the late military head-of-state General Sani Abacha which was strategically recouped from the Swiss Government. The Centre, further expressed its delight on the plans of the Government in funding some National social safety nets, which include the areas of education, health, especially; immunization and maternal mortality, and other social infrastructure. These social infrastructures are to be furnished by the purposeful disposition of the Late Abacha’s loot currently being warehoused.

The Centre expressed these views through its Executive Chairman, Mr. Debo Adeniran, that the Abacha loot is an unprecedented historic one given the enormity of its figure, recording that while previous Administration were making very little or no progress in its effort at ensuring the retrieval of the fabled looted Abacha sum, the Buhari-led Government has successfully recovered the siphoned funds and diligently apportioned the money in resolving major social declines that has perpetually arrested the development of the Country and her people. He also expressed the group’s concern that after Abacha’s death in 1998, the missing money became the subject of an international lawsuit involving the government of Switzerland where the bulk of the money was discovered indicating that the late former Military maximum ruler single-handedly embezzled the bulk of the Nation’s oil reserves, and in turn threw dust in the eyes of Nigerians.

The Executive Chairman of CACOL, while recalling the issues that arose during the visit of American business magnate, Bill Gates, where Gates gave lots of meaningful insights to the developmental challenges of Nigeria in his speech wherein he suggested that investing in health, education, and welfare opportunities of every Nigerian is the foundation for sustained prosperity in the country. He related the suggestions made by Gates to the planned social development programmes by Federal Government saying, “it is right to say that the Administration is pro-active in resolving the pending issues that has over-time, stunted the growth of the Nation and its people, pauperizing the social attributes of people in the country thus handicapping the development that would have attained in saner climes”. The CACOL Chairman also expressed delight that the Muhammadu Buhari-led administration is one to be emulated as it does not only proffer solutions to problems that has been lingering  in the country, but also has listening ears to suggestions on how best to make the country’s socio-economic condition thrive better. These traits are not to be discarded nor forgotten on time but to be perpetually treasured and utilized.

Concluding, Mr. Adeniran suggested that, while the Abacha’s loots are being retrieved, it is imperative that a transparent and secure framework be instituted to monitor and regulate the equitable disbursement of the funds to avoid it being re-looted by those overseeing the projects it is appropriated for. Mr. Adeniran further discerned that it would be on history as a fatal Administrative catastrophe if the Abacha’s loot recovered by the Government is re-looted. He also suggested that a deterren sanction be instituted to put officials and organizations that would have access to the appropriated funds in check as this will in-turn, prevent the re-looting of the money.

The Centre for Anti-Corruption and Open Leadership, CACOL, sadly announces the passing away of its Director of Research, Programmes and Documentation, Mr. Olawale Salami (aka, DON), who passed away at the Summit Hospital, Shasha, Lagos after a brief illness. Mr. Salami took ill while preparing for work by morning died about 5.30pm on Monday 9th April, 2018 after efforts to resuscitate him by the medical team was unsuccessful.

DON, who just celebrated his 50th birthday less than two weeks earlier, was one of the first to believe that the establishment of CACOL will thrive despite the fact that other comrades expressed their fears and disbelief in the struggle. He was a cerebral activist, a straight-forward team player and diligent worker with passion for the betterment of his society and humanity at large.

As we mourn the death of his contribution to contemporary Revolutionary Struggles, The Centre for Anti-Corruption and Open Leadership, CACOL, Executive Chairman, Staff, Friends and well-wishers join the family in mourning the departed icon in the Anti-Corruption Struggle. His contributions to the advancement of the efforts to birth a new Nigeria society will be sorely missed.

May his memories continue to be a source of inspiration to those left behind and courage not to relent in the struggle till the desired victory is taken beyond illusion but attained for the benefit of all.

The anti-corruption crusader was reacting to the CJN’s directive on Monday to heads of courts in the country to create special courts for corruption cases at the special court session held at the Supreme Court in Abuja to mark the commencement of the new 2017/2018 legal year. Onnoghen averred that the creation of special court would speed up determination of cases.

“As a matter of fact, since the kitchen became hotter for corruption criminals based on the ongoing war against corruption, corrupt elements are fighting back using every means available including lapses in our laws to evade justice. The plethora of corruption cases that the ongoing anti-corruption drive has thrown up calls for reforms in the existing judicial system to ensure that the efforts to rid Nigeria of sharp practices bears fruits.” Mr. Adeniran said as he welcomed the order for the creation of special courts.

“As corruption fights backs viciously, the logical response is to; lawfully remove all the encumbrances on the path of the anti-corruption drive which corruption criminals cleverly use to wriggle through the labyrinths of the existing judicial system to escape justice.”

“We therefore welcome and commend the CJN and the judiciary for this bold initiative and the proactive steps being taken to achieve the establishment of Special Courts, just as we call on all the Arms of the Federal Government to work in unison to fight corruption, a scourge that have encroached our country for too long and threatening to obliterate it. The decision is akin to taking one step ahead of criminals who had always deployed different tactics to evade justice should it come to fruition.”

For more press releases and statements, please visit our website at
www.corruptionwatchng.com, www.cwatch.thehumanitycentre.org 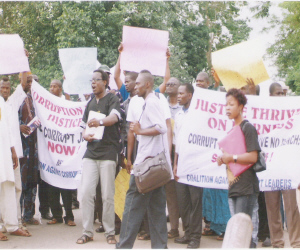